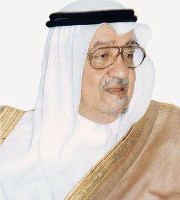 The life of His Royal Highness Prince Abdullah Al-Faisal Al Saud, may Allah have mercy on him, was full of achievements which reflected his deep generosity and humanity with a strong attachment with Saudi culture, literature, sports, and education.

After holding senior government positions in the 1950s, His Royal Highness decided to focus on entrepreneurship and set up a private business in the early 1960s in the rapidly developing Kingdom. He established AET – Arabia Est for Trade & Shipping Co Ltd, at the Jeddah seaport, in partnership with Gellatley Hankey a global leader in freight management, shipping, and logistics services. These businesses were expanded with a contract to represent the world leading Lloyd’s Insurance Agency and subsequently STTB – the Saudi Tourist & Travel Bureau Ltd; both of which companies became leaders in their sector in the Kingdom. Over the years these businesses were merged into Sigma Ltd and their leadership was transferred to His Royal Highness’ sons, while he set up and developed the world renowned Al Faisaliah Group as well as the Abdullah Maritime Company.

It is the strong foundation laid by His Royal Highness that has allowed Sigma Ltd over the past sixty years to expand into a number of sectors such as logistics, industrial & quality inspections and maintenance & services.